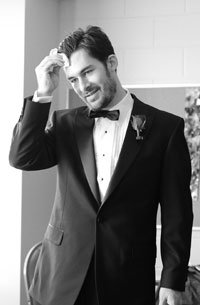 Matthew Buckley Smith was born in Atlanta, Georgia. He earned his MFA in poetry at the Johns
Hopkins University. His poems have appeared !or will soon appear in various magazines,
including Beloit Poetry Journal, Commonweal, Iron Horse Literary Review, Measure, The
Alabama Literary Review, Think Journal, and Best American Poetry 2011. His poetry has
been nominated for a Pushcart Prize. He lives in Baltimore with his wife, Joanna.

The sprinkler system wakes up on the hour,
Casting its vacant arcs across the lawn.
All night its clockwork tends to every flower
Bedded down here to bury roots and spawn,
While, nowhere in particular, my friend,
Who just last week lay mumbling on a cot,
Is dead, is nothing time or work can mend,
Though his machinery remains to rot
As I walk late at night across a campus
Hundreds of miles away, which is to say
As near to him as anywhere, and tempus
Fugit no less irreparabile
From me than from the blossoms here and there
Who do not know their lot, and do not care.

When you were nothing but dull-witted, wayward cousins
We missed you less—believing you were unaware
Of what was happening, of the unlikely reasons
You’d be replaced. We liked to think you free of care.
That was your role: our stout, thick-snouted kin. Ill-fated
But oblivious, you fed and dozed and mated.

Then someone took another glance at what you left
And found your skulls allowed for brains as big as ours,
Or bigger, making room for fleeting dreams and deft
Apologies on deathbeds richly spread with flowers.
In desert chambers lay the artifacts of pain
You must have felt at losing those you knew you’d join.

Of course we also learned you dragged slick leaves of flint
Across the bones of your own tribe, to strip fresh meat.
You mastered fire, you cooked. Maybe you even spent
Odd noiseless moments sulking, feeling desolate.
We’ve done much worse, and better, in our hopeful age,
Strutting our share of hours and more upon the stage.

I’ve thumbed through color photographs of crumbling tools
And like to think I understand those minds that gave
Form to the world the way our own minds do. What fools
We were to tiptoe from the darkness of your cave,
Leaving you there to murmur God’s name in a tongue
That died before it could evolve beyond a song.

Better, I guess, that you do not pick up
Tonight, since I have no real news, no hope
Of entertaining you. Everyone here’s
Asleep by now, or dancing at the bars.
It used to be just you and me awake
At hours like this, the sidewalk wet and slack,
The traffic lights rehearsing absently.
Silly for me to wait on your reply.
Can you hear that—the siren whining past?
I wish just once the sound might be replaced
With music, something soft. Who wouldn’t rather
Die to the blues? Chopin? One sound, another,
After a while I guess it doesn’t matter . . .
Well, that was what I called for, to the letter,
Company for a couple blocks. I’m home.
The neighborhood’s not bad. You ought to come.
Cafés, a park. It’s prettiest in spring;
Trees blossom on the street and starlings throng
To every windowsill. Small children laugh . . .
Not really. I am drunk. I’ve said enough.
The empty sound of time recording time
Echoes across the phone line like a dream.
We’ll have to talk more soon, or not at all.
We’re getting late. It’s old. I hope you call.

Wow, these poems are truly extraordinary, especially the first two! Congrats on winning! I do not know you, but you deserved to win---such rich language, subtlety, and fabulous contents. Just by reading these three poems, all of we poets may be inspired to become better at writing. Thanks for sharing your poems.

Thank you for the poem, Matthew, I was there for the mumbling. Just recently I passed by Steve's old room and I thought I saw a whisper of his ghost. But when I stopped and turned it wasn't there. My mind does some mumbling of it's own, sometimes.

""the blossoms here and there
Who do not know their lot, and do not care.""
^^Love it!

Until recently everything I read published about Neanderthal man pointed to their "unfortunate genetic inferiority" as an explanation of why they became extinct, never accepting the possibility that they may have actually been superior to modern man in many ways and that we were completely clueless about the cause of their extinction. So much for the smug.

WOW! With Richard Wilbur gone, I was wondering who had picked up the torch. GOOD poems! I'm going to order your books right now.