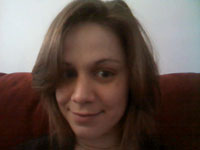 Emily Leithauser’s poetry and translations have appeared or are forthcoming in Measure, Southwest Review, New Ohio Review, Unsplendid, Literary Imagination, Blackbird, Able Muse, and Iron Horse Literary Review, among other journals. She is a Ph.D. student in English at Emory University, where she is also a Visiting Lecturer in the Creative Writing Program. She lives in Atlanta, Georgia.

for G.L, author of The Dinosaur Dilemma

All eloquently labeled once—objects
find ways to tease you now in vague dreams.
And you wander, docile, speechless, through the room

to your soft chair, where, for now it seems
you know you wrote the book you’d like to hear
me read aloud. Words you love. Not themes.

“The dilemma is what to do
with fossils found on someone
else’s property.

In the yellow weeds, two boys
dig up the looser bones
of a blackened dinosaur.”

I’m your ventriloquist, or I’m white noise,
but something budges language at your core:
my borrowed sounds your rediscovered toys.

(previously published in The Raintown Review)

At dawn, the leopard watches the firmament
dissolve in sunlight through his cage’s bars;
he’s fresh from dreams of tearing flesh, the scent
of deer still on his paws. A carnivore’s
nightmare: instead of reddened fields, a cell’s
dull iron; of opened ribcages, walls.

If even Dante’s waltz can’t sidestep fate,
or trick the jailor, then art itself reveals
no door. The leopard roars at the stanza’s gate,

claws the corners, scrapes the floor, and steels
himself for solitude. We read our curse
between the lines, vaguely recalling meals

devoured in the wild. No words will quite coerce
these bars to bend, or move the universe.

Brought over from the former Orient,
this pagoda’s become a movie theater now:
a grainy Western preview dubbed in French;
a blue-lit Latin love story (expanses
of pixilated flesh tattooed with sub-
titles, the unclaimed skin and sighs quite real . . .

except a fly keeps knocking at the screen,
adding beauty marks to ingénues,
or dots of poison to the famous glass
of milk in Suspicion, or to arrows shot
by Robin Hood across a studio;
and, drifting into someone’s platinum curls,
and dizzy from the film-distorted faces,
or from the speed of now-dead Fred Astaire,
the insect loses us and we forget
again what is and isn’t here).

A baby hawk—
the nib of its beak pink—
picks at rabbit gut.
Ribboned innards,

dropped in flight,
lie further down the path;
I wipe my shoes on grass.
The only sounds:

the pluck on strings
of tripe, the ragged catch
of air in someone's throat.
(Watch how the bird

screens its prey
with a wing, and leaves the fur
alone, dear, and abstains
from opening

the cooling back.)
Even now your throat's
a thrill; your body's still
unknown to me.