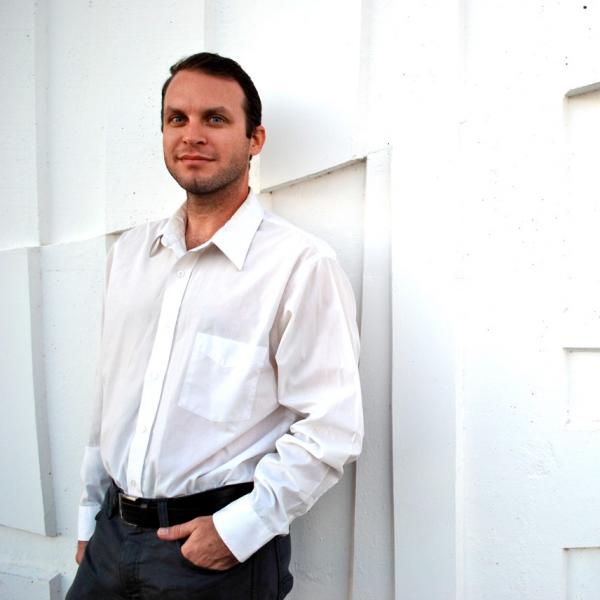 William Cordeiro has work appearing or forthcoming in Best New Poets, The Cincinnati Review, Copper Nickel, DIAGRAM, Fourteen Hills, Nashville Review, Poetry Northwest, Salamander, Sycamore Review, the Threepenny Review, Zone 3, and elsewhere. He coedits the small press Eggtooth Editions. He is grateful for a grant from the Arizona Commission on the Arts, a scholarship from Sewanee Writers’ Conference, and a Truman Capote Writer’s Fellowship, as well as residencies from ART 342, Blue Mountain Center, Ora Lerman Trust, Petrified Forest National Park, and Risley Residential College. He received his MFA and PhD from Cornell University. He lives in Flagstaff, where he teaches in the Honors College at Northern Arizona University.

By badlands past renown
this buffaloed, hell-bent
stained off-road trail of stones
tears off to no return.

(previously published in Museum of Americana: A Literary Review)

The Greyhound downshifts to a chuffed-out grind.
A shock of lights awake the eyes of strangers
Who’ve slumped on one another’s shoulders, rolled
Across three states, holding duffels in their laps,
Their temples rattled on hard panes of glass.
They grab their jumbled packs from overhead
And shuffle off, vegetal, out the gate,
Late stumble down a crumbling street to harbor
Or slumber through dark tunnels into slums,
To Meadowlands beyond these storied heights.
I left a girl and job here what now seems a life
Ago. Holidays done, I’m going back home.
Yeah, missed connection. 11:20’s
Last chance to transfer, so a gaunt white cop
Has grumbled. Can’t sleep in Port Authority.
Best get a room. Six sharp, the first bus leaves.
I hoist the deadweight of my lumpy bag,
Avoid the shit-stained bum crouched on the floor,
And figure I can find an after-hours
Dive nearby, which leaves me with some time
To kill. I wander up 9th Avenue
Until I find a godforsaken hole-
In-the-wall—it’s all rubble, plywood, braces
Between two dumps beneath some overpass.
The bartender, in a lacy bra and cut-
Offs which show a little sag of ass, ignores
Me. I gork upon a stool. Another man down
The end is cradling his face inside
The crook of his locked arms; comes up to smoke,
Giving me the eye. A drunk keeps punching
Buttons on the busted juke and feeding it
More coins while someone else adjusts a radio.
Half-smudged, “Our Specal Deal 2nite is: Shot.”
I see the man beyond the mirror’s end
Is blind—the clock I’ve studied hasn’t moved
In days. There’s nothing here that works, but all
Pay dues somehow as if they owed a debt
Of gratitude to forces which have kept
Them up this long. When last call comes, I pitch
Outside and breathe the ruddy smear of dawn
By the transport depot with its sweet exhaust;
I feel each minute drain away the stars.

These latter days I’d rather hide my face
with eavesdroppers and scopophiliacs
who’ve taken shelter in this musty place.

Boy, just lookee at that rain and hail.
Woo-wee, sugar! Scatter, brain matter,
and the weather’s gray from ear to ear:

a great big blinding flash! Now I count
-down to thunder but it never comes,
which means the lightning’s right smack

dab inside my head—amid the bluff
analysis, loyalty to failures, sawdust,
logic’s cannibals, and balled-up scraps

of cash. It’s raw and cloudy like the out-
line of a candled egg, this facsimile that’s
been over-copied into smutch. Exactly so,

I’m getting hammered; the chips are down.
Shadows drink their bodies up then slip
away. Everyone out there is saying cheese.

And me, me or the demiurge, being half
the source of all I sense, am still not sold
each detail’s burnt into a verge with fact.

In no-bit Western towns like Santa Claus
or Dead Horse Gorge, you’ve given up
on love, the past—its flash and patches—
coming back or not, the sentiments
you can’t believe have given up on you.
They squint with tin-roof shacks and yards
of dull brown rock as folks on broken porches
dawdle empty talk. Or simply stare. For days
the only human contact you have made,
you couldn’t bring yourself to say one word;
just nod, the waitress topping off your cup
until the coffee pot ran out. You pocketed
a couple packets of the cream then stole
one glance behind you as the door slapped shut,
your brain as ripe as yesterday’s motel room—
road unthreading from the next plateau.
A traffic of slack years elapses. Let it.
Now clouds refuse to budge above the canyon.
You take your rucksack and a credit card,
its numbers worn so you can pick a lock,
and stink with beer while big rigs rumble by.
Strip mines and boulders cave in, slowly. A raven
circles in the bleached-out sky. Sit and think
here on the shoulder, about the pig you’ve been.
Your novel bludgeoned longer, crowded, wrong,
though not one page is written down. Hot wind
blinks gravel-dust along gaunt jagged plains
a river once ran through. Fate holds its grudges.
Presume to see clear to some water’s edge
what’s only heat above a strip of tar.
Another truck has passed you, and this is
the story you wake to and must live again,
one pissant town like any other since
your luck won’t change. A beat-up Prelude stops
to ask where you are going. You say, the same
place you are, man. Just further down that road.

(previously published in The Threepenny Review)