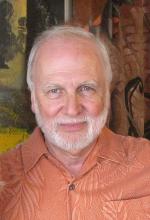 David Alpaugh still thinks of himself as a Jersey boy but has lived long enough in the San Francisco Bay Area to be included in the Heyday Press anthology, California Poetry from the Gold Rush to the Present, and to have been a finalist for Poet Laureate of California. He holds degrees in English from Rutgers University and the University of California, Berkeley, where he was both a Woodrow Wilson and Ford Foundation Fellow. His poems have appeared in more than a hundred literary journals from Able Muse to Poetry to ZYZZYVA, and his first collection, Counterpoint, won the Nicholas Roerich Poetry Prize from Story Line Press. David Alpaugh’s essays, “The Professionalization of Poetry” (Poets & Writers Magazine), “What’s Really Wrong With Poetry Book Contests” (Rattle), and “The New Math of Poetry” (Chronicle of Higher Education)—have been widely discussed online. His musical play, Yesteryear: 3 Days in Paris with François Villon, was recently published by Scene4. Since he debuted the double-title poem in Mudlark in 2016, more than a hundred have appeared in journals and anthologies. He currently teaches literature for the Osher Lifelong Learning Institute (OLLI) at their UC Berkeley and Cal State East Bay campuses.