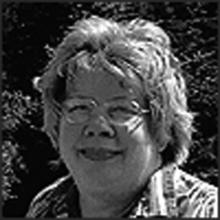 Gail White has published three previous books of poetry (The Price of Everything, Easy Marks and The Accidental Cynic) and several chapbooks, the latest being Sonnets in a Hostile World. She has edited three anthologies, including coediting The Muse Strikes Back. Gail is widely published and her poetry has appeared in such journals as Measure, Raintown Review, First Things, and Mezzo Cammin, and in anthologies such as Villanelles and Killer Verse, both from Pocket Poets. Gail received the Howard Nemerov Sonnet Award for 2012 and 2013. She lives with her husband and three cats in Breaux Bridge, Louisiana.
Asperity Steet is a special honoree in the 2014 Able Muse Book Award.