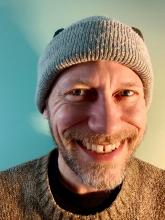 James Kochalka is the author and illustrator of more than forty graphic novels. He has won two Eisner Awards, one Harvey Award, and four Ignatz Awards. In 2011 he was named the first Cartoonist Laureate of Vermont. He also has a separate career as a rock star, performing with his band James Kochalka Superstar. In 2007, Rolling Stone named his song “Britney’s Silver Can” one of the 100 Best Songs of the year.