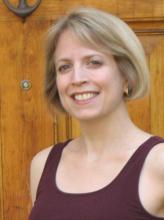 Melissa Balmain is a humorist, journalist, and teacher. She recently became editor of Light, the country's oldest journal of light verse, which she helped resurrect and bring online after 20 years in print. Balmain's poems have been published in such anthologies as The Iron Book of Humorous Verse and Killer Verse, and in American Arts Quarterly, Lighten Up Online, Measure, Mezzo Cammin, The Spectator (UK), The Washington Post, and elsewhere. Her prose has appeared in The New Yorker, The New York Times, McSweeney’s, Details, and many other magazines and newspapers. She is a columnist for Success magazine and the author of a memoir, Just Us: Adventures of a Mother and Daughter (Faber and Faber). Balmain has won national journalism honors and been a finalist for the Donald Justice Poetry Prize, the Howard Nemerov Sonnet Award, and the X.J. Kennedy Parody Award. She teaches at the University of Rochester and lives nearby with her husband and two children. Walking in on People, the winner of the 2013 Able Muse Book Award, is her first full-length poetry collection.