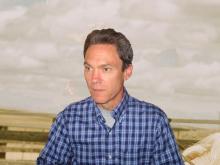 Richard Wakefield, born in Renton, Washington, in 1952, earned his PhD in American Literature at the University of Washington-Seattle with a dissertation on the poetry of Robert Frost. For nearly thirty years he has taught literature and composition at Tacoma Community College and the University of Washington-Tacoma. For over twenty-five years he has been a reviewer of fiction, literature, biography, and literary criticism for the Seattle Times. His collection of poetry, East of Early Winters, was published by the University of Evansville Press in 2006 and received the Richard Wilbur Award. His poem “Petrarch” won the 2010 Howard Nemerov Sonnet Award. His poetry, fiction, and criticism have appeared in the Midwest Quarterly, Sewanee Review, Seattle Review, Atlanta Review, Light Quarterly, American Literature, Able Muse, Measure, The Formalist and many others. He and his wife, Catherine, have been married thirty-nine years and have two grown daughters.