They sent the boy to build a fire beneath
the steel water trough after a week
of freezing fog had hung a hoary wreath
on every bud and leaf along the creek.
The men were busy at the barn with new
cold-weakened calves. The boy would have to go.
He loaded stove-wood chunks he’d split in two
until the shouldered rucksack bent him low.
In fifty strides the barn was lost—or taken.
He stood confused with cloud, more alone
than in the broad summer fields, forsaken
by or perhaps forsaking the life he’d known.
He staggered along the frozen creek a mile.
He knew the way, but in that cloud it seemed
all unfamiliar; he backtracked twice, and while
he searched, unsure, it was as if he’d dreamed
his life and now awakened cold and lost.
But then the looming rock crib marked his place
to turn, made strange beneath a coat of frost,
and then the pasture trail a wispy trace.
With no more landmarks to help him find his way
he often knelt as if in prayer to see
if he had kept the trail, until from gray
the trough emerged, a solid certainty.
He found the water solid too, so made
his feeble fire, fed the growing flame,
saw how heat and light rose up and played
against the steel. And then the horses came.
From formless white in single file appeared
the thirsty horses taking living form,
condensed from cloud, more solid as they neared.
He stroked them as they drank and felt them warm
with living heat that he had helped to save.
Their breath plumed up in clouds, more fog unfurled
into the void, and as they drank they gave
a solid, living purpose to his world. 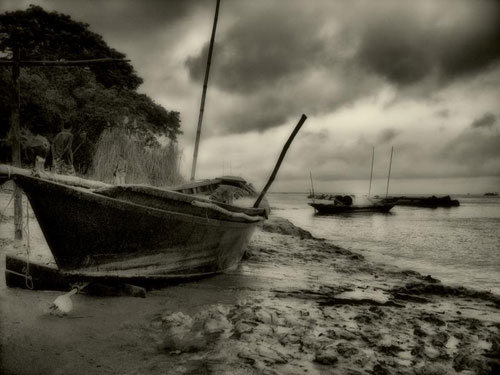 
The time ahead
shrinks as we look,
shrinks whether we
look or not.
We look forward
to the fact
that what is happening
as we speak
will soon recede.
This backward-tugging
current toward
oblivion can
be counted on
as one depends
upon a drug
to kick in soon—
sooner, please!
“Half in love with easeful”—
not exactly.
Call it a proleptic
pang of gratitude
for what, when it finally
arrives, we can hardly
wait to fade.
Our stubborn impatience,
our hurry to be done with
comes coupled with a cloudy
zest for any outcome.
The idea
of a beginning
is the beginning
of an end.

The hospital room was the size of a birdcage. Only a flimsy curtain separated me from the Russian man. His dumpy wife was visiting again, her sagging face done up in bold paint, and atop her head, a pink pillbox hat. Sure enough, the room was filling with ugly clouds of Russian.
I picked up my violin and started to play. Outside the window, I stared at the leafless black trees. Sealed shut, a matronly nurse told me: years back, a suicide. I wanted the beautiful woman who plowed her Plymouth into my car to show up. I wanted a nurse to drive a needle of morphine into my arm. I wanted to leap out the window. A moan floated by; I looked down, expecting a hole in my chest.
It was the violin. I didn’t know how to play. “Baby, what can I get you?” the beautiful woman asked when she visited the first time. She felt sorry. She had her eyes closed when we collided. I said a violin. I’d had one in my car. Not mine, it belonged to the woman who’d called to say it was over. I was on my way to return it. I’d told her she played so badly it stung my ears. Maybe that’s what ended it.
The Russians were shouting. The beautiful woman told me, “I usually don’t like where I am.” That’s why she drove with her eyes closed. Now I tried it and began to drift, feeling no longer myself but Dmitri from Brothers Karamozov, waiting for Grushenka. She’d arrive any minute in a tight-fitting dress and a fur hat.
The front door slammed. I heard someone brush snow from a coat. I called out, and there stood Ivan in the doorway, wearing a pink hat. “You can’t be saved.”
Who said I wanted salvation? Only for Grushenka to say, “Shhh,” her sugar breath on my face, then straddle me and pound my chest with her fists.
The Russians were fighting, louder. I opened my eyes just as the pillbox hat skidded on the floor. A slap. I rang the nurse’s bell, until it screeched like an angry, injured bird.
A nurse charged into the room. She told the Russians to cut it out and me to stop messing with that violin. “Sounds like someone’s dying in here.”
When they wheeled out the Russian for tests, his wife peered around the curtain. She wore her hat again, but lopsided, her cheek bright pink. Plunking herself into the chair beside me, her lower lip trembled, and I hoped to God she wouldn’t cry. She pointed to the violin. What the hell, she looked worse off than me.
She tucked it under her chin and began to play, music soaring around the room, then she got down on her knees and prayed. I felt my blood coursing through me, and I pushed myself up between the birdcage bars, so close I could see her make-up sparkling, just like my windshield, smashed on the street. I remembered thinking, how can a disaster look so beautiful?