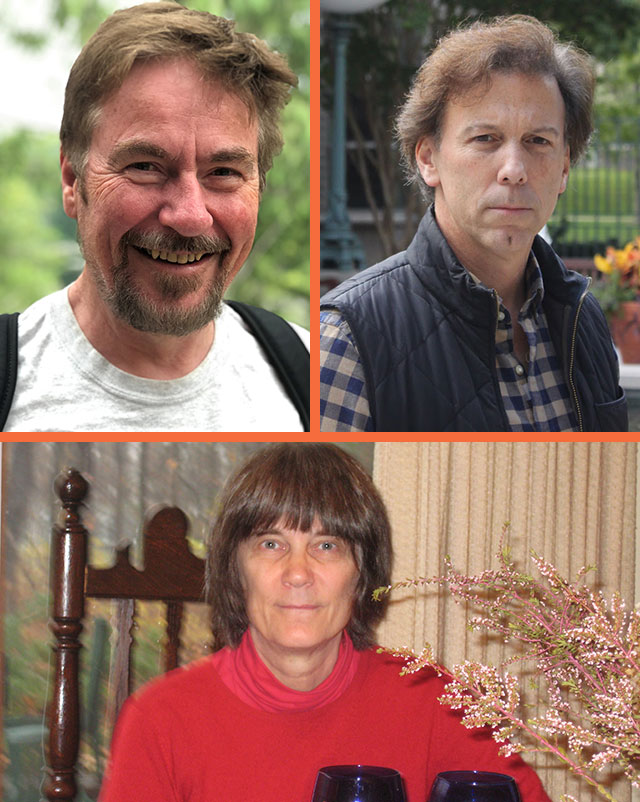 John Beaton’s poetry is metrical and has been widely published in media as diverse as Able Muse and Gray’s Sporting Journal. He wrote a monthly poetry page for several years for the magazine Eyes on BC and served for four years as moderator of one of the internet’s most reputable poetry workshops, Eratosphere. He recites his poems from memory as a spoken word performer and a poet member of the band Celtic Chaos. His poetry has won several awards, including the 2015 String Poet Prize and the 2012 Able Muse Write Prize for Poetry. He is a retired actuary who was raised in the Scottish Highlands and lives in Qualicum Beach on Vancouver Island, Canada.

Emily Grosholz was born in the suburbs of Philadelphia, and attended the University of Chicago and Yale University. Since 1979 she has taught at the Pennsylvania State University, where she is now Edwin Erle Sparks Professor of Philosophy, African American Studies, and English. Her first book of poetry, The River Painter, appeared in 1984; her most recent book, Childhood, has been translated into Japanese, Italian and French, and has raised $2500 for UNICEF. She has lived in France, Germany, and the UK, and traveled to Japan, Russia, Costa Rica, and around the Mediterranean and the Baltic. She and her husband, Robert Edwards, raised four children in State College, Pennsylvania, on the flanks of the Tussey Ridge, countryside that they and their neighbors, with the ClearWater Conservancy, are working to protect and preserve. Her book, Great Circles: The Transits of Mathematics and Poetry, will be published in 2018 by Springer.  The Stars of Earth: New and Selected Poems (Word Galaxy Press, 2017) is her eighth book of poetry.

A.G. Harmon’s fiction, essays, and reviews have appeared in Triquarterly, the Antioch Review, Shenandoah, the Bellingham Review, St. Katherine Review, Image, and Commonweal, among others. His fiction won the 2001 Peter Taylor Prize (A House All Stilled, University of Tennessee Press, 2002) and was the runner-up for the 2007 William Faulkner Prize for the Novel. His academic work, Eternal Bonds, True Contracts: Law and Nature in Shakespeare’s Problem Plays was published by SUNY Press. He was a 2003 Walter Dakin fellow at the Sewanee Writers’ Conference. He grew up on horse-and-cattle farms in Mississippi and Tennessee. Currently, he teaches at The Catholic University of America in Washington, DC.

David Alpaugh still thinks of himself as a Jersey boy but has lived long enough in the San Francisco Bay Area to be included in the Heyday Press anthology, California Poetry from the Gold Rush to the Present, and to have been a finalist for Poet Laureate of California. He holds degrees in English from Rutgers University and the University of California, Berkeley, where he was both a Woodrow Wilson and Ford Foundation Fellow. His poems have appeared in more than a hundred literary journals from Able Muse to Poetry to ZYZZYVA, and his first collection, Counterpoint, won the Nicholas Roerich Poetry Prize from Story Line Press. David Alpaugh’s essays, “The Professionalization of Poetry” (Poets & Writers Magazine), “What’s Really Wrong with Poetry Book Contests” (Rattle), and “The New Math of Poetry” (Chronicle of Higher Education)—have been widely discussed online. His musical play, Yesteryear: 3 Days in Paris with François Villon, was recently published by Scene4. Since he debuted the double-title poem in Mudlark in 2016, more than a hundred have appeared in journals and anthologies. He currently teaches literature for the Osher Lifelong Learning Institute (OLLI) at their UC Berkeley and Cal State East Bay campuses.