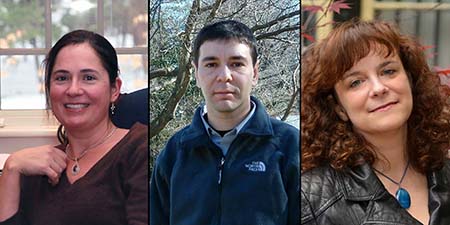 Jacob M. Appel is a physician, attorney, and bioethicist based in New York City. He is the author of seven collections of short fiction, five novels, and a collection of essays. His short stories have been published in more than two hundred journals and have been short-listed for the O. Henry Award, Best American Short Stories, Best American Mystery Stories, Best American Nonrequired Reading, and the Pushcart Prize anthology. His commentary on law, medicine, and ethics has appeared in the New York Times, New York Post, New York Daily News, Chicago Tribune, San Francisco Chronicle, Detroit Free Press, and other major newspapers. He taught for years at Brown University and currently teaches at the Mount Sinai School of Medicine.
The Cynic in Extremis was a finalist for the 2017 Able Muse Book Award.

Anna M. Evans’s poems have appeared in the Harvard Review, Atlanta Review, Rattle, American Arts Quarterly, and 32 Poems. She gained her MFA from Bennington College, and is the editor of the Raintown Review. Recipient of Fellowships from the MacDowell Artists’ Colony and the Virginia Center for the Creative Arts, and winner of the 2012 Rattle Poetry Prize Readers’ Choice Award, she currently teaches at West Windsor Art Center and Rowan College at Burlington County.
Under Dark Waters: Surviving the Titanic is a special honoree of the 2017 Able Muse Book Award.

April Lindner’s first poetry collection, Skin, received the Walt MacDonald First Book Prize from Texas Tech University Press. Her novel, Jane, a modernization of Jane Eyre, was published by Poppy (Little, Brown) in 2010;Catherine, a modernization of Wuthering Heights, is forthcoming in 2013. A professor of English at Saint Joseph’s University, April lives in Havertown, Pennsylvania, with her husband and sons.

Aaron Poochigian earned a PhD in Classics from the University of Minnesota and an MFA in Poetry from Columbia University. A winner of the Able Muse Book Award with Manhattanite (Able Muse Press, 2017), a finalist with The Cosmic Purr (Able Muse Press, 2012), and the current winner of the Richard Wilbur Award with American Divine (University of Evansville Press, 2021), he has also published a book of narrative poetry, Mr. Either/Or (Etruscan Press, 2017), and numerous books of translations with such presses as Penguin Classics and W.W. Norton. His work has appeared in such publications as Best American Poetry, the Paris Review, and Poetry.